A Major Case of Phasmophobia

Feeling lost and alone in our situation is now the norm.   We had nowhere to turn or no one to turn too for help.  The religious community dismissed our claims as unfounded, paranormal community just made our situation worse,  help from unconventional sources proved futile, and we hadn't heard back from The Dead Files.   We were living in our own Hell and were prisoners in our own home.

So many things were happening to us that we began to suffer from paranoia and a severe case of Phasmophobia.   Everything that happened in our house at that point caused us to take a second look.  Somethings were easily explained but some things had no explanation at all and just caused the fear to grow. 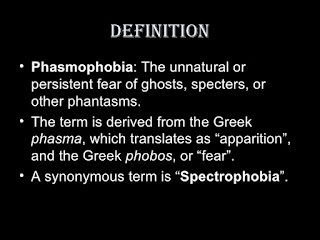 One evening while I was in the bathroom changing a light bulb in a vanity light fixture, the burnt out bulb just shot of the socket.  It flew out the door and smashed into the wall in the hallway.  Even though I was terrified I tried my best not to show it, I just kept doing what I was doing.  The remaining bulbs started to come out of their sockets and flew out.  Jennifer heard the noise and came into the hallway as the last bulb crashed into the wall.  "What happened!?!", she asked.  "Ghost", I said as I walked out.  I was trying to be strong and not show fear but I broke down when I was alone.

The screams, the spoon, the health issues, the mental torture, the shadow figures, and apparitions were breaking us.   At the time, we thought it had to be the house.   We decided we should consider moving and started our search.  However, everything we find was out of our price range or wouldn't work for us.  It was like something was keeping us in our house; we were trapped.

We stopped watching most of the paranormal shows.  We felt that nothing could help at this point and anything we felt we could try would just make the situation worse.  No one was sleeping and the younger girls wouldn't go into their bedrooms.  Chloe slept over at friends most of the time and would come home sporadically.  Our health issue worsened and I started to hear the female voice again.  No matter what I tried to do to stop it, I couldn't.   She kept saying, "You can come to me, I can help you come to me."   I was beginning to break and thought if I would just give in to her all this would go away.  I felt that I was the reason for all our issues because I felt it was me she wanted.  If I gave up myself I could save my family.

She was breaking me.