Question From A Reader : "I love seeing pictures of your home. Do you ever see the dead in any of your photos...?"

We just posted an update to our ghost in the blog.  It's titled Time to Cowboy Up!  Check it out and please share it.  We would really appreciate the support!

We're starting to get into the nuts and bolts of our Dead Files episode and how they helped up so the blogs entries may be a little shorter but they will be more frequent.  All you have been so patient between entries, we appreciate that so much.

We still enjoy getting questions.  Your questions help us think through things and also help us through the healing process.  One thing to keep in mind is that we went through nearly 8 years of hell until we finally got a handle on things.  Healing from that takes time and all of you are a part of that healing process, for that we thank you.

Here's a question we got from Trish Calcote via social media.

"I love seeing pictures of your home. Do you ever see the dead in any of your photos, videos or hear them in your voicemail etc?"

If you follow us on social media you've probably seen a lot of pictures of our ranch, horses, and dogs.  We love our place despite all the past issues.  We take pictures in the moment; when something funny seems to be happening or just the shear beauty of what we see. Our house is filled with framed prints of most of the pictures you see on social media.  We never set out to take pictures in an attempt to capture something.  We also discourage others from taking pictures on our ranch in hopes of catching something paranormal.  To us, that's just a recipe for disaster. 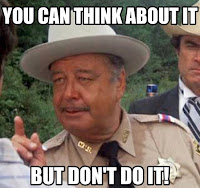 We've never really explored the pictures beyond what the subject of it is.  I'm sure if we study some of the pictures in more detail we may find something questionable.  Especially if they were taken from 2008-2016.  Most of the time we take pictures and they're quickly uploaded to our social media accounts without really look at them. Maybe some day we'll go back and look to see if we did catch something.

There has been times that we've gotten activity by accident.  The first being during a birthday party we had for Chloe.  Several of the pictures had orbs and something that looks really menacing in one of the pictures.  You can look at those pictures in the Party Crashers blog entry.

We caught the scream of the crazy woman on video by complete accident once.  Emi was making a video of herself making Reese's Peanut Butter cups and the crazy woman screamed as she was recording.  You can see the video in the blog entry You Scream, I Scream, But She Screams Louder!  This was an important video for us because it finally gave us the evidence we needed to convince others that something was truly happening.

We have also had issues with our cell phones at times.  I remember one time during a phone conversation, we could hear whispering.  We couldn't make out what was being said but it appeared to be a woman's voice.  At first I thought it was just interference but we hung up to try to get a better connection and she was still there.  I changed phones and the whispering continued.  The whispering was non-stop and lasted throughout each call.  We had times when our phones would ring with random calls from people.  We would answer but no one would be on the other end.  When we would call them back they would tell us they didn't call.  One other issue with a phone happened as Jennifer and I were watching TV.  Out of the blue, a woman screaming came through my phone. It was about four or five screams.  The strange thing was that my phone was on silent.

Your question made me think about to an incident that happened when I was in my mid twenties.  I lived alone at the time and things would happen that seemed odd but I was always able to come up with some sort of logical explanation.  However there was one thing that nothing could explain away.  One evening, the phone rang.  The first thing I noticed was the amount of static on the line.  It was like an old radio.  I said hello a few times but nothing but static.  As I was about to hang up, heard a voice. "Lance?  It's uncle Jerry.  Tell your mom I'm okay." I was frozen in shock because it was his voice.  I was finally able to respond, "what, who is this?"  The voice on the other end replied. "Tell her I'm okay."  Then the called disconnected.  I quickly hit *69 to call the number back but got a recording, "the number you called is no longer in service."  A rush of fear and anxiety ran through me and I immediately called my mother.  After I told her what had happened, she said "I was just thinking about your uncle Jerry this morning for some reason and hoping he was okay."

Thanks for the question Trish!  I hope I was able to answer it for you!

If you have a question, we encourage you to ask.  Our goal in sharing our story continues to be to help those who are suffering and just need some courage to get the help they need.  No one should suffer in silence.

We've made it easier to submit questions too!  Just Fill out the "Contact Us" Form on upper right.

If your question is for one of us in particular, please say who it's directed to.   Also, we won't publish your name unless you specifically ask us to do so.

This has “Sarah” written on it several times like she was learning how to write her name.  She was the child orphan spirit we all saw usua...