We'd like to welcome new guest blogger, Rick!  He's sharing the terrifying story of his experiences in the desert.  Here's Part 1 of his story.

The purpose in sharing our story has been to help others; giving them strength and courage to get the help they need to live a normal life.  That purpose has turned into a mission.

We don't shy away from our experience and neither should anyone else.  No one should suffer in silence out of fear of being judged or ridiculed.

Thanks and enjoy Rick's story.

So this story has been hard to write. I've made several starts but have never really been able to finish. Maybe it's because we're not truly done with it yet. But reading the Eberhardt's story when I was searching for my own answers helped me get through our experiences and to a place of more peace. I thought this could be one way to show my appreciation for them sharing their experiences and potentially contribute to their mission to help others dealing with strange and scary things in their homes.

Our story starts in September 2017 when my long-time girlfriend, Sheri, and I moved to the Mojave Desert in California after I got out of the Army. This was a new chapter in our lives, leaving the military life behind and becoming civilians again. I had been hired on to a Federal job, so hopefully you'll understand my not disclosing our exact area. We moved to a place where we had no ties, no family, no friends; just the purpose of starting something new.

We landed at a short-term rental we found before we left the military and then, in January 2018, we found a more permanent place to rent. This place, where we still live, gave us the opportunity to have our two horses on the same property with us instead of boarding them at another location. Our landlords had moved out of state and we've become caretakers of their property as well as renters.

"I could never sleep here at night all by myself."

That's what the wife half of our landlord duo said when my girlfriend told her she would be alone for two weeks while I went to Colorado Springs on my first business trip. Too bad we didn't have the foresight to ask why she would say something like that. Or why the husband, who usually lets nothing go without commentary, had nothing to add to his wife's statement.

We wrote her remark off as referring to the isolation of the place. Nobody would hear you scream here since the closest neighbors had strategically put up fences and planted trees as visual reminders of their ideology on privacy. No worries. We had a shotgun, a rifle, and almost a 4-wheel drive. Taking inspiration from Hank Jr., we were both country folks; we could survive.

The property had three structures. The main place was a drab, blue-gray mobile home that more resembled a modular house thanks to the wood panel siding and half-length covered porch. A small back yard with grass and two sweeping mulberry trees were a nice touch. A dead tree pointed like an ominous finger toward the west end of the house. Sheri hung a hummingbird feeder on it. 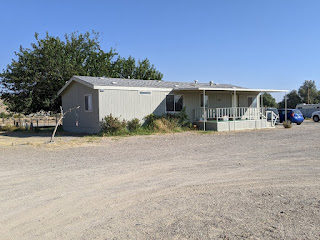 Front of house as approach from driveway.

The other two structures were in a fenced off yard set off from the home place and surrounded by a dark brown sheet-metal fence taller than my 5 feet 9 inches by a head. An all-metal tan shop dominated the area. It was high as a two-story building and boasted two garage-style roll-up doors on the north side. Right next to it was a paint shop that, ironically, was unpainted. It's gray metal walls and decayed wood roof looked like a graveyard mausoleum compared to the nicely painted workshop. Talk about a stark contrast.

There was only one rule - no painting the inside rooms of the house. All we were told was there was a tenant who painted a room (not sure which) black. The landlords said it took many coats of paint to get back to a light color. We were fine with that, especially since I don't like to paint. Anything. But it begs the question why anyone would paint a room black. In hindsight I can only think of it being a person or people with dark tendencies. No telling what was done in the dark of that room.

Our interest in the place, however, was strictly for the horses. Right out the front door was a half-acre area that was enclosed on three sides. The owners gave us free reign to finish fencing this part off so Sheri could put the two horses there. For the first time in our 8 years together, we had finally found a place that we could have the horses with us instead of boarding them miles away. It was great!

That first year our priority was turning our little place into a home for us and the horses. We bought corral fences and shelters, started watering the trees and the grass, and weeded the rose bed out front. Nothing seemed out of the ordinary. Even that couple of weeks Sheri stayed alone was uneventful. Our new life in California was taking on a sense of normal.

Normal, that is, until Buddy showed up out of the desert in January 2019. Somewhere around a year to the day of our move-in date. I was at work when I got the first text from Sheri about him on January 22. Buddy is a rusty red colored dog about the size of a fox. He has a white patch on his chest and the most soulful brown eyes you can imagine. He found us during a cold spell that had temperatures dropping to the teens at night. I immediately knew I wanted to keep him, but we had to try and see if we could find an owner. We reported him to the local animal shelter's Facebook page and also on another lost and found page. Then we waited. 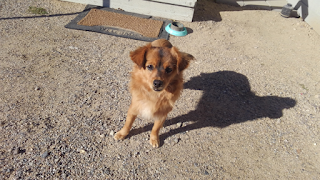 At first we set up a place for him to sleep on the front porch in a cooler with some towels because of the cold. We put a dish by the steps and bought some dog food. In just a day or two, we moved him inside and he's been inside with us ever since. Nobody ever claimed the little guy. So after waiting the required two weeks, Buddy joined our little family. The vet said he was about a year-and-a-half old. Nobody has been able to identify what type of dog he is. Speculation is mostly on a blend of chihuahua, Pomeranian, dachshund, and even terrier. Only his mom and dad really know.

Up until that point, nothing was too unusual. I learned after the fact that Sheri would smell cigarette smoke on occasion, but it wasn't anything she felt worth mentioning at the time.

The month after Buddy moved in, things took a dramatic turn. Not for the best.

I got a text from Sheri on Wednesday, Feb 13, 2019. We had put a small basket with toys & treats on top of Buddy's kennel in the kitchen. One of them came off the kennel and crashed to the floor. Except it didn't just slide off, the way it landed it looked like it was flung off the crate. As I remember it, this was when we finally started thinking something paranormal was going on. Sheri had actually been having experiences before then, but had not said anything to me about them.

So this was the start of a journey that, while not "run-out-of-the-house-screaming" level of scary, forced us to accept that something out of the ordinary was going on in our home. We started living in a state of constant dread and the fear slowly built until I started looking for answers which eventually led me to this blog. I am going to stop here for now, as one post is just not enough to tell this story. In future contributions I will highlight some of the experiences that came next as the activity ramped up, our reactions and struggles to deal with what was happening, and ultimately the story of a surprise visitor that shed a ton of light on what was going on.